Coding Changes That Will Impact Radiology Practices In 2019 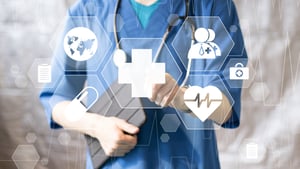 Each year there are revisions of Current Procedural Terminology[i] (CPT)® that will impact the way radiology practices code their procedures and, ultimately, how they are reimbursed for those procedures.  The majority of CPT code changes in radiology for 2019 are for Interventional Radiology procedures.  Those that pertain to diagnostic radiology are in ultrasound, MRI, and nuclear medicine.  We’ll cover the diagnostic codes first, and then go into detail on the interventional coding changes.

The coding for Breast MRI has been changed by the deletion of two codes and their expansion into 4 new codes, as follows:

The new series of codes provides for the distinct billing of non-contrast exams, which previously had to be billed using the with/without contrast codes.  Note that 77048 and 77049 also include computer-aided detection (CAD real-time lesion detection, characterization and pharmacokinetic analysis) when performed.  This bundling eliminates the separate use of HCPCS code 0159T that was previously added when performing CAD.

Another new MRI code 76391 has been issued for MR Elastography.

There are two areas of change in ultrasound, with new codes added for targeted dynamic microbubble sonographic contrast characterization and for elastography as follows:

The coding for peripherally inserted central venous catheters (PICC) has been expanded with new codes that include imaging guidance when it is used, and revision of the existing codes to specify that no imaging guidance was used.

With the changes described above, it is no longer appropriate to use CPT 76937 or 77001 for ultrasound or fluoroscopic imaging guidance in addition to these procedures.  Similarly, these codes include any imaging to document the final catheter positioning, so the billing of a separate chest x-ray (71045, 71046, 71047, or 71048) will not be allowed on the same date as the PICC insertion or replacement.  When the final positioning is not confirmed, the PICC procedure should have modifier -52 added to indicate the limited scope of the procedure.

Beginning in 2019, FNA biopsy procedures will be bundled to include imaging guidance when performed under ultrasound, fluoroscopy, CT or MRI.  Accordingly, a new series of CPT codes will be used for these procedures to replace the combination of old code 10022 (FNA with imaging guidance) and a separate imaging modality guidance code.

In a similar fashion, renal pelvic catheter procedures will now be bundled to include all imaging guidance and radiological supervision and interpretation in a single code.  Accordingly, CPT 50395 (introduction of guide into renal pelvis and/or ureters with dilation to establish nephrostomy tract) has been deleted and replaced by the following:

Note that both of the new codes (50436 and 50437) now include all imaging guidance, and all associated radiological supervision and interpretation, as well as post-procedure tube placement when it is performed.  Revised code 74485 should be reported to interpret pre- and post-dilation imaging, making note of the response to treatment, potential complications, and the fluoroscopy time used.  Retrograde percutaneous nephrostomy continues to be reported using code 52334 without any change.

Percutaneous replacement of a gastrostomy tube under fluoroscopic guidance continues to be reported using CPT 49450 without any change.

The bundling of imaging guidance and the supervision and interpretation of the exam into a single code for the entire procedure continues to be the major theme of these revisions.  We will separately analyze the financial impact of these changes in an upcoming article, even though Medicare has reported that the overall effect of the 2019 Medicare Physician Fee Schedule on radiology practices will be minimal.  Each practice has to evaluate any fee schedule changes in light of its mix of modalities and procedure volume.  Be sure to subscribe to this blog as we give you the information you need to understand and analyze the ongoing changes in radiology reimbursement.

[1] Current Procedural Terminology is a copyrighted code set developed and maintained by the American Medical Association, and CPT is a registered trademark.

Credit Card Security Is an Important Issue For Medical Practices

Review of The Medicare Quality Payment Program for 2019