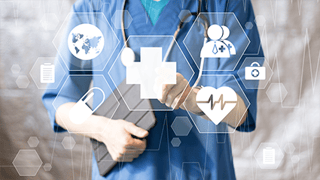 Physicians participating in Medicare’s Merit-based Incentive Payment System (MIPS) have the option of reporting data for 2018 as an individual Eligible Clinician (EC), as part of a group practice that bills Medicare using the same Taxpayer ID Number (TIN), or as part of a Virtual Group.  The latter option is available to a group with 10 or fewer ECs, or an EC in solo practice, who might want to join forces with at least one or more similarly-sized practices for the purpose of reporting their MIPS data for a performance year.  A solo practitioner participating under two TINs may even form a virtual group across both practices.

A virtual group must contain TINs comprised of 10 or fewer ECs.  TIN size is determined by including in the count those ECs who would otherwise be exempt from MIPS based on low volume, low Medicare dollars or their first year of Medicare participation.

A formal, legal written agreement must be established among the solo practitioners and groups that make up a virtual group.  It has to include a list of the ECs who bill under the TINs that will be members of the virtual group.  The participation requirements and expectations are to be clearly articulated, understood, and agreed upon. The virtual group agreement must be executed on behalf of each TIN by an individual who is authorized to legally bind the party.

Virtual group reporting poses new requirements and challenges as clinicians will have their performance assessed at the virtual group level across all applicable MIPS performance categories.  Here are some reporting considerations:

The virtual group concept might initially sound attractive to a small practice.  Advantages may include shared responsibility and shared risk, and the availability of resources to support and positively impact performance in the MIPS program that might not otherwise be available to smaller groups or individuals.  However, putting the plan into operation could be a bigger challenge than expected and, once the election is made, it will be irrevocable for one performance period.  Therefore, EC’s who are contemplating the formation of a virtual group should consider these pros and cons:

Radiology practices that are interested in forming a virtual group should download the Virtual Group Toolkit from the CMS Resource Library and follow the directions for making the election.  There is a very short window of opportunity to form a virtual group and make the election for the 2018 performance year.

If a virtual group is not the answer, then some considerations surrounding the decision to report as an individual or as a group practice can be found in our article Exempt from MIPS?  Think Again About Participating as a Group.  Subscribe to this blog for the latest information to help your practice achieve success with MIPS reporting in 2017, 2018, and beyond.

Exempt from MIPS? Think Again About Participating as a Group

Exceptions and Exemptions from MIPS Reporting for 2017: What Radiologists Need to Know